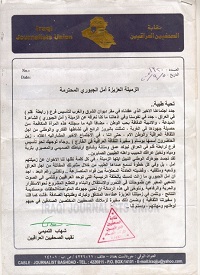 Representative of the Iraqi Journalist’s Union

Shehad Al-Timimi, who was assassinated in 2008, named Amal the IJU’s Ambassador of Iraqi Culture. This document is a scan of Shehad’s appointment of Amal, who proudly served for many years. 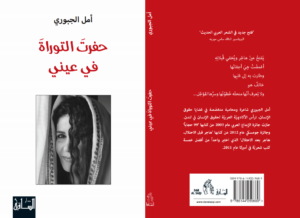 You Engraved Torah in My Eyes

A new narrative and a daring step towards a serious interfaith dialogue between Islam and Judaism, You Engraved Torah in My Eyes continues Amal’s tradition of expertly blending art and politics to engage a serious message. The poetry seeks to encourage the art & culture of public apology, a process which begins with this apology to Iraqi Jews for the wrongdoing done to them by the Iraqi state, especially since the exodus of the 1950’s onwards.

Professor Shmuel Moreh, Iraqi Jew and professor at the Hebrew Universality of Jerusalem: “This book is a new conquest in the modern Arabic poetry” 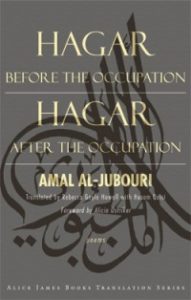 “In spare, vivid, and poundingly heartfelt language, [al-Jubouri] shows us her country before the occupation by U.S. troops and afterward . . . these poems have a timeless, haunting quality, and they offer not just enormous pleasure but understanding.” —Library Journal, starred review

Hagar Before the Occupation, Hagar After the Occupation contextualizes America’s occupation of Iraq through the Qur’an’s story of Hagar. Complementary pairs of poems portray life before and after the war. This work simultaneously mirrors Hagar’s desperate running between Safa and Marwah, as we pace frantically between pre- and post-occupation Iraq—the poet begging in vain for poetry not to abandon her people.

Me and the Paradise Beneath Your Feet (Poetry) 2014

Winner of the Silver Prize in Aesthetics from the Beirut Book Fair.